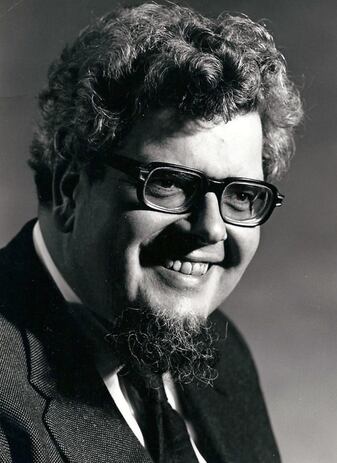 In 1986 John Ogdon arrived at the Birmingham School of Music to give a lunchtime concert in the nearby Birmingham Midland Institute. With very short notice I was introduced to him and he very politely asked me if he could include my newly written Piano Sonata No.1 in the concert. I was absolutely delighted and spent a wonderful few hours with him working on the piece - I played to him and he played to me! As it happens due to his huge programme that day he only had time to perform the Waltz movement (the finale). But it was totally stunning to hear, with some of the most wonderful playing I have ever heard, and a most sublime pianissimo that still lives with me to this day. Some years later after John had passed away I felt that I wanted to develop the work into a Piano Concerto and I have dedicated it to the musical genius - John Ogdon. ​
​

​“this (violin) concerto is full of passionate outbursts interspersed with introvert sections.  It is deeply beautiful...”
​ Andrew Downes - composer

Scored for: Violin solo - pic,  2fl, 2ob, 2cl, 2bsn, contra-bsn, 4 hns, 2 tpts, timps, percussion, strings. ​
The last movement was the first to be composed. The vision I had was of the old Orthodox church in the Ukrainian village of Bartne, where my father was born: it was to this same church that the Nazis took him overnight before being taken to Germany as slave labour. ‘The bells call to you. The church is wooden and the doorway low, meaning you have to duck to enter. Inside you see the priest and the iconostasis, and the smell of incense and the sound of the choir fill the air.’ This is the atmospheric setting of the music. My father’s free spirit is represented by the violin, whilst the traditional church order is in the brass chorales, and the congregation is represented by both the string and wind families.
Having completed this movement I knew I had to write more. I did not want to be too retrospective with the shape of the work in the traditional sense of a violin concerto. Rather, the violin should shine as soloist but also the orchestra would also have its moments: I did not want to tire the listener with too much solo violin (as I have found in the Sibelius and Mendelssohn violin concertos). I dispensed with the traditional cadenza and gave the violin a quasi-cadenza to end the work: my father’s spirit rushing to heaven.

The first movement begins with a slow canon, which gradually builds until the violin bursts in with great panache. The violin then joins the basses in a repeat of the opening canon and this again leads to another solo outburst. The wind now begin a manic dance, which becomes more and more energetic and involved. The movement ends with a repeat of the dramatic violin theme now on tutti strings: though the violin has the final say.

The second movement has a lighter more mercurial spirit, with violin harmonics, string pizzicatos, glockenspiel and bowed crotales; though the music is menacing at times. After a tutti forte, solo voices of the clarinet and oboe can be heard recalling a distant memory. This is taken up by the violin.

The third movement is a manic scherzo, which takes as its starting point the music from my second viola sonata. This is an urgent, frenetic rondo full of dance rhythms, though not without a sense of humour. The movement ends with a sense of hesitancy. The finale follows without a break.

Being half-Ukrainian the folklike tunes and rhythms of my father’s country have always appealed to me. In this concerto I feel that I have more deeply embraced my roots. Dedicating the work to my father Maksym, who suffered cruelly at the hands of the Nazis, feels right. I’m sure he would have loved it.